It was pleasant to do the work in the Fipresci jury together with Jan Storø  et Kostas Zaligas (Greece). It was actually hard work, watching 27 films altogether in both the International competition and the Greek competition. Many of the films had a high level of quality.
Here are the two films we gave the Fipresci price to (and our reasonings)
FIPRESCI AWARDS
The FIPRESCI (International Federation of Film Critics) Jury consisting of:
Isabelle Debuchy (Luxembourg)
Jan Storø (Norway)
Kostas Zaligkas (Greece)
Awards the best film of the International Competition Feature Length section to:
Luchadoras by Paola Calvo and Patrick Jasim (Germany, Mexico)
Jury’s Reasoning:
“Luchadoras is a powerful statement of how some women in Ciudad Juárez on Mexico’s border to the USA are dealing with their lives. They are single mothers – and female fighters. Lady Candy, Baby Star and Mini Sirenita are all generously inviting us into their lives – telling us about how they combine fighting, a regular job, and motherhood. Directors Paola Calvo, Patrick Jassim have had a warm and wise hand on the camera and the editing.” 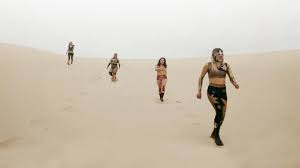 FIPRESCI also awards the best Greek film participating in TDF’s international program sections to:
Golden Dawn A Public Affair by Angelique Kourounis (Greece)
Jury’s reasoning:
“There is no doubt that the verdict that was announced on the 7th of October 2020 in Athens, after a lengthy trial, of the neo-fascist Golden Dawn being a criminal organization, is pivotal and historic for the future of democracy in Greece and Europe.
With that in mind, director Angélique Kourounis, managed to capture the many aspects of that lengthy trial, giving the audience all the important details that they should know. It’s a film of important historic value, one that you watch breathlessly, made by a woman who has dealt with the Golden Dawn in the past, with the camera in her hand and knows exactly what she’s talking about”. 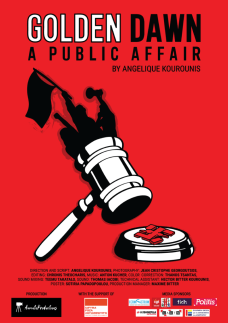